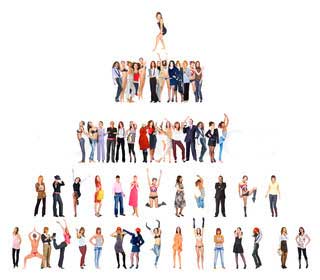 In a decision published on November 3rd, 2014, the Italian Competition Authority has ruled that the market systems aimed not to the selling of goods or services, but rather to achieve economic benefits through the mere referral of others, thus being created a pyramid system, are an unfair commercial practice within the meaning of art. 20, Co II, 21, co I, letter. b) and c), 22 and 23, co 1, letter. p) of the Italian Consumer Code.

The opportunity for the intervention of the Authority has been the case, reported by Consob, concerning the disclosure by a person through his own website, advertising messages aimed at promoting investment, whose economic benefit for members resulted closely related to the gradual expansion of the network of subjects recruited and completely detached from performing any actual business of selling goods or services, according to the scheme of pyramid selling.

The Authority also found that the messages published by the professional were misleading because supposed easy money, but omitted to inform the consumer (art. 22 of the Italian Consumer Code) that set out the gains could be achieved only if a high number of people had joined the system, while, in contrast, if the ‘chain’ had broken the risk would be high and, therefore, no real economic benefit would be achieved by the new members.

Therefore, this marketing practice was considered improper by the Authority in accordance with the Italian Consumer Code as contrary to professional diligence and appropriate, by misleading prospettazione characteristics and the system of remuneration of the investment programs advertised to distort appreciably the economic behavior of the average consumer with regard to the product and earning potential offered by the professional.

The Italian Authority for Competition and Market, by acting on this case, not only imposed a financial penalty to the professional, but also promised to continue to monitor the spread through the internet promotional communications, through the deceptive prospettazione of easy and immediate profits, actually intended only to recruit other consumers in a pyramid scheme.

The Authority’s decision can be found HERE.