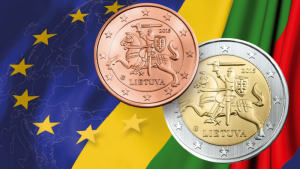 From January 1, 2015, another Member State of the European Union (19 of 28) has joined the Eurozone. Since yesterday, therefore, Lithuania (following in the footsteps of Estonia and Latvia) is the nineteenth EU country to adopt Euro.

Already in 2006 Lithuania had asked to join the Eurozone, but had been “rejected” because it did not meet the convergence criterion on inflation, considered too high. However, through a rigorous adjustment path, the government has managed to cut public spending by 10.5% of GDP between 2009 and 2013 and shot down the deficit from 9.3% to 2.6%. “Lithuania has taken exceptional measures in difficult times to achieve the objectives required to join the euro: these results will benefit at the same time the Eurozone and Lithuania,” said the governor of the ECB, Mario Draghi, in a video message.

The entrance of Lithuania into the Eurozone, not only broadens the countries that adopt the European currency, but also changes the rules of the game for the European Central Bank. With the passing of the 18 Member States to adopt the single currency, in fact, the EU treaties provide for a change in the method of voting in the Governing Council of the ECB: the system used so far, “a member one vote” is stored and replaced by a system rotation among the representatives of the 19 central banks of the Eurozone. The rule has been provided by the board of directors already in December 2002 to maintain its ability to act with the enlargement of the Eurozone and the addition of new members in decision-making that sets monetary policy Community.

Until now it had the right to vote all members of the Governing Council of the ECB formed on the model of the Bundesbank and, therefore, consists of six permanent members – including President Draghi – gathered in the Executive Committee, as well as by representatives of 18 central banks State party Eurozone.

To ensure the ECB greater speed in its decisions, the European treaties provide that, once the threshold of 18 member countries of the eurozone, will switch to a system that abandons the “universal suffrage” between central governors.

The new voting system therefore provides that the rotation is monthly and the governors, in turn, use their right to vote. The Eurozone countries are divided into groups according to the size of their economies and their financial sectors and the governors of the countries, currently ranked first to fifth place (Germany, France, Italy, Spain and the Netherlands) divide four rights vote. All other (14 with Lithuania), have 11 voting rights.